Welcome to the Fall 2015 edition of the Penn State Biomedical Engineering News. 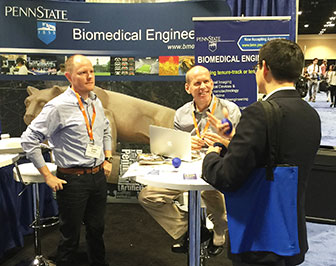 The Department of Biomedical Engineering held their inaugural reunion event on July 11 and 12, 2015. The event commemorated graduates from both the undergraduate and graduate bioengineering programs since the department's inception in 1974. The reunion also marked the ten year anniversary of the first graduating undergraduate class of 2005.

Lance Lian has joined the Biomedical engineering department as an assistant professor.

Pak Kin Wong has joined the department as a professor.

Biomedical Engineering Professor, Jian Yang, was recently featured in an interview by Qmed News for his work with citrate materials.

Motor proteins that pause at the ends of microtubules and produce pushing forces can also stimulate their growth, according to researchers at Penn State. The proteins’ function could be a critical component in understanding cell division and nerve branching and growth.

Margaret Slattery, assistant professor of biomedical engineering, was among 70 of the nation’s emerging leaders in engineering education selected to attend the National Academy of Engineering’s seventh annual Frontiers of Engineering Education Symposium (FOEE).

The department of biomedical engineering is pleased to announce the promotion of two faculty members effective July 1, 2015.

Jian Yang, professor of biomedical engineering, has accepted an invitation to serve as a member of the Biomaterials and Biointerfaces (BMBI) Study Section for the National Institutes of Health (NIH) Center for Scientific Review.

Eight faculty members in the College of Engineering at Penn State were recently appointed to early career and development professorships.

The Lemelson-MIT Program announced today (May 19) that Justin Keenan and Kevin Paroda, both undergraduate students in the College of Engineering at Penn State, are winners in the Lemelson-MIT National Collegiate Student Prize Competition.

A former leader within the Women in Engineering Program at Penn State, Sharon Waxmonsky ('12 BIOE) now focuses her engineering talents towards her career with Johnson & Johnson.

Have news items you'd like to share? We would love to hear about your recent milestones and accomplishments including job changes, promotions, awards, marriages, and births. Please email submissions to Mindy Krause

Biomedical Engineering now has a Facebook page. Follow us to get the latest about the Department and help find old classmates.